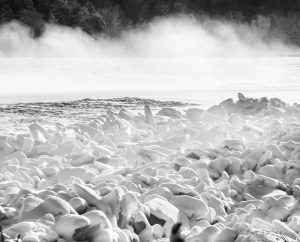 So you live in Wisconsin, far away from any hurricanes and ocean storm surges. You don’t need flood insurance, right?

Wrong. The big thaw spreading across the Midwest is a perfect lesson for why you do, in fact, need flood insurance.

The Wall Street Journal reported that in Lone Rock, Wisconsin, temperatures rose 80 degrees in three days, from minus 39 to 41. That kind of temperature swing is a recipe for floods.

Most obviously, melting ice and snow can swell rivers. But especially worrisome are “ice jams,” which form when frozen rivers melt into large ice chunks that can lodge together and block the river’s flow. In the worst cases, these artificial dams cause serious flooding in the area around the river.

This happened last year in Vermont and upstate New York when a rapid thaw followed a deep freeze. In Swanton, Vermont an ice jam on the Missisquoi river flooded a state highway for over a mile and inundated several homes, forcing many to evacuate.

Here’s the bad news: standard homeowners insurance policies don’t cover flood damage. If you don’t have flood insurance for your home, you probably aren’t covered under your homeowners or renters policies because flood risks used to be considered uninsurable.

To address this lack of coverage, the National Flood Insurance Program (NFIP) was created back in the 1960s. The NFIP is a federal program that provides flood insurance to participating communities. If your community participates in the program, you can often purchase insurance through a private insurer that handles policies and claims on behalf of the NFIP.

Private insurers have also recently begun offering flood insurance outside of the NFIP, as new modeling techniques have helped them get a better handle on the risks and costs.

Flood insurance will usually cover physical losses to your home caused by floods or flood-related events, like erosion – with some limitations (trees and fences aren’t covered, for example). You can also buy coverage for the contents inside your home, making flood insurance a crucial tool to help you get back on your feet.

Make sure to talk to your insurance agent about the right flood policy for you. Yes, even you Wisconsinites out there.

Don’t Get Burned by Mishandled Fireworks