“We went out again. We got maybe six steps before lights blared in our faces. It had crept up, big wheels barely turning on the gravel. It had been lying in wait and now it leaped at us, electric headlamps glowing in savage circles, the huge chrome grill seeming to snarl.” 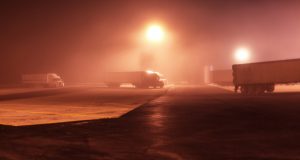 When Stephen King wrote Trucks – a tale of big rigs, pickups, and earth movers coming suddenly to life and terrorizing people they had trapped in a diner – he didn’t speculate about how or why they’d been incited to malevolence. Aliens? The Soviets? Who cared? It was the 1970s, and all he needed to do was deliver a solid horror yarn.

I loved that story when I read it in high school – mainly because it scared the daylights out of me and yet I knew for sure it couldn’t happen. Could it? Nah!

Today I read an article about “platooning”, in which “a lead vehicle wirelessly assumes control over the throttle and braking of one, two, or more vehicles following along behind it. In many scenarios, the drivers in a platoon continue to steer their vehicles and can disengage from the convoy at any time, but the first vehicle determines the speed and braking maneuvers of the entire platoon. Because the follower trucks maintain constant communication with the lead vehicle and have synchronized acceleration and braking, platooning trucks can maintain much shorter distances between themselves as they travel.”

Bam! I was right back in that 1970s diner inside Stephen King’s warped, brilliant, and quite possibly prophetic brain.

From there I time traveled forward to Bastille Day 2017 in Nice, France, where 84 people were killed when a radicalized individual plowed a 20-ton truck into a crowd waiting to watch a fireworks display. The previous December, CNN reminded me, 12 people were left dead and 48 injured when a tractor trailer was driven into a Berlin Christmas market.

“Platooning, which is based on vehicle-to-vehicle (V2V) communications, has been shown to increase the fuel efficiency of both the lead and following vehicles, saving fleet operators money and reducing carbon dioxide emissions,” the article in Verisk’s Visualize insurance news and thought leadership site tells me comfortingly. It cites a German pilot program in which truck platooning generated fuel savings of 3 to 4 percent. Platooning could lead to huge cost savings for businesses and consumers.

And then I read an article in Today’s Trucking that began:

“When Harold Sumerford’s phone rang at 2:30 a.m. on April 2, he knew the news couldn’t be good. But he figured it was probably the safety department – not the CFO telling him the company’s entire computer system was down from a ransomware attack.”

Sumerford is CEO of J&M Tank Lines. According to the article, it took four days for his company to begin functioning after the attack, “and during those four days, they weren’t able to bill any customers or enter anything into the system.”

Granted, this is a far cry from having the entire fleet go on a murderous rampage, but the Internet of Things is still young.

J&M’s experience, according to Today’s Trucking, was “just one example of a rapidly growing problem with cybersecurity in the trucking industry. Transportation and logistics companies are now among the top-targeted industries by computer hackers.”

According to an article in ZDNet published just a few weeks ago, “Hackers are deploying previously unknown tools in a cyberattack campaign targeting shipping and transport organisations with custom trojan malware. Identified and detailed by researchers at Palo Alto Networks’ Unit 42 threat intelligence division, the campaign has been active since at least May 2019 and focuses on transportation and shipping firms operating out of Kuwait in the Persian Gulf.”

This as everyone I know seems to be panting with enthusiastic anticipation for vehicles that drive themselves!

Look, I’m no Luddite. I appreciate the benefits offered by and realized through interconnectivity.

But I also have a front row seat observing the difficulties people who assess and quantify risk for a living experience in getting and keeping their heads around the ever-changing world of cyberrisk.  As data and “stuff” become increasingly intertwined and the risks surrounding them are less clearly defined, is it so unreasonable to suggest that pushing humans out of the driver’s seat at this moment isn’t the the only or best path to traffic safety, low prices, and reducing our collective carbon footprint?