Unsurprisingly, the opioid crisis was a major topic of conversation at the 2019 Workers’ Compensation Research Institute’s (WCRI) Annual Issues and Research Conference.

Workers’ compensation insurance has been particularly affected by the crisis. Opioid use can, perversely, increase a worker’s risk of disability. Opioid use can lead to dependency, which results in increased dosages and higher costs. Dependency can lead to abuse; abuse can result in on-the-job performance impairment and further injuries – or it can delay a worker’s ability to return to work. In the worst case scenario, abuse leads to addiction and death.

These are just some of the reasons why opioid use can significantly increase the costs of workers’ compensation claims.

The Centers for Disease Control and Prevention (CDC) found that 70,327 people died from fatal drug overdoses in the U.S. in 2017. 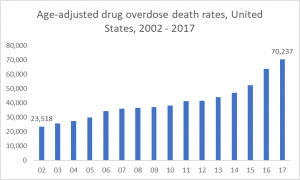 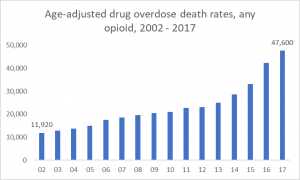 As Dr. Alan Krueger of Princeton University noted, the problem is most concentrated among men and women with lower levels of education: “Americans with diminished economic expectations are particularly vulnerable to the opioid epidemic.”

But no one is immune, he added. “Essentially no group has been spared from this crisis in the U.S.”

Dr. Vennela Thumela of the WCRI presented recent findings about the correlates of opioid abuse and overdose. She found that mining and constructions workers were most impacted, representing the highest percentage of opioid prescriptions among all workers receiving pain medications. Higher rates of opioid prescriptions also correlated with workers who are older, male, and live in rural areas.

In fact, per Dr. Davis, 24 percent of all opioid deaths in the state between 2011 to 2015 were construction workers.

The costs are staggering

Dr. Krueger put it bluntly: “This is a human tragedy.”

It has also been a tremendous tragedy to the U.S. economy. Dr. Krueger cited a 2017 Council of Economic Advisers (CEA) report, which estimated that in 2015 alone, the economic cost of the opioid crisis was over $500 billion – or 2.8 percent of GDP. Dr. Krueger noted that the number of opioid-related overdoses in 2017 increased by at least 50 percent since 2015 – implying a cost in 2017 alone of about $750 billion.