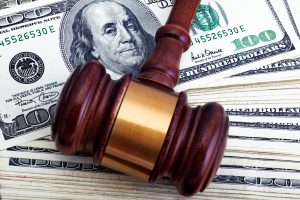 As anyone who has rented an apartment in New York City knows, your security deposit is basically a gift to your landlord. Good luck ever seeing it again after you move out.

There are a few theories for how to avoid this. Mine has been to pray fervently for divine intervention, which worked out…once. An acquaintance tells me to simply never pay the last month’s rent. (The I.I.I. does not in any way endorse this strategy.)

But one strategy no one suggests is to contest the withholding of your deposit in small claims court. Because you’ll end up spending more money than your original deposit was worth.

If only there were an app for that…

Turns out, there is. DoNotPay is an app that uses algorithms to determine whether someone has a case in small claims court – and will help file legal documents. From contesting parking tickets to resolving landlord disputes to filing lawsuits for data breaches (like Equifax), the app apparently has about a 50 percent success rate in court.  Without recourse to a single lawyer. And it’s free.

This sounds like a dream for individuals who need legal help they can’t currently access. Because lawyers ain’t cheap.

But is there a sinister side to this? The U.S. is a notoriously litigious society. The plaintiffs bar has been very creative in winning massive verdicts that many argue are distorting the tort system. It’s been estimated that the costs of torts in 2016 were $429 billion – or about 2.3 percent of the GDP of the U.S. Reformers would argue that there’s an entire cottage industry whose primary purpose is to sue anyone and anything with sufficiently deep pockets to justify the effort.

Could an app like DoNotPay, which today helps the little guy fight his unjust parking ticket, one day turn into the means to seamlessly litigate every aspect of our lives at the push of a button? Only time will tell.

In the meantime, I just got a parking ticket in Brooklyn, because of course I did. Alexa, open DoNotPay.