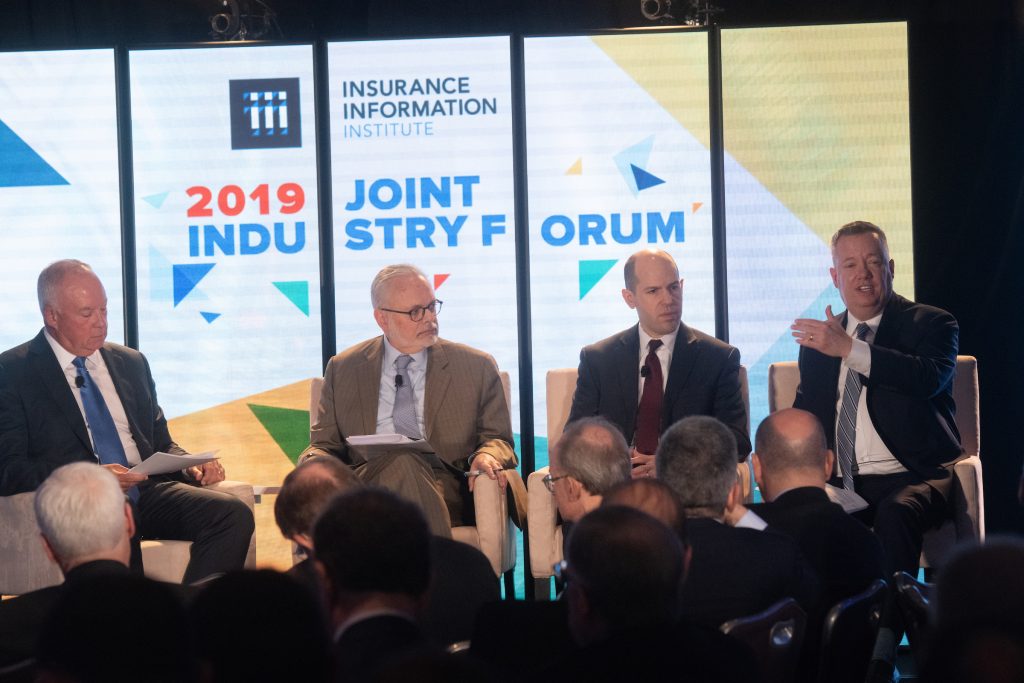 The 2018 financial results for the property/casualty industry were strong. According to Verisk Analytics, private p/c insurers in the U.S. reported a nine-month net underwriting gain of $4.7 billion. The industry combined ratio was 97.3 percent – down from 104.1 percent in 2017.

“It’s unusual to have an industry-wide underwriting profit,” said Jay Gelb, managing director at Barclay’s, speaking at a geopolitical risks panel at the 2019 I.I.I. Joint Industry Forum. “But 4Q 2018 is going to be worse.” The insured losses from Hurricane Michael and the disastrous California wildfires will make a dent on industry underwriting results. And in the last two years the total global industry catastrophe losses were about $230 billion, the highest level for any two-year period, Gelb noted.

While the industry did well in addressing these catastrophe losses, greater threats may be looming on the horizon for the p/c industry and the economy generally.

Panelist David Wessel, director of the Hutchins Center on Fiscal and Monetary Policy and senior fellow at the Brookings Institution, listed a few.

In the short term, he expressed concern about the ongoing government shutdown. He also pointed out that, while incoming economic data are strong, the markets are expressing continuing pessimism, assuming higher weight on downside risk for 2019. In the long term, Wessel listed the continuing productivity growth slowdown and climate change as serious threats.

John Huff, president and CEO, Association of Bermuda Insurers & Reinsurers (ABIR), added the continuing challenges facing global insurance regulations, particularly in light of recent political events that seem to suggest a souring attitude towards global interconnectivity. Huff did express some optimism, however: “people want to stay at the table for international regulatory standards because business is global. They don’t want conflicting regulatory standards.”

Political uncertainty in the U.S. are also reasons for insurers to be concerned, per Huff. There has long been a push to “de-risk” government liabilities and move some of them into the private market, including the National Flood Insurance Program (NFIP), crop insurance, the Terrorism Risk and Insurance Act (TRIA), and earthquake insurance. How this will play out in the current political climate remains to be seen.

Gelb included flood and wildfire risks to the equation – both of which may increase in frequency and severity due to climate change.

Despite these possible threats, the panelists are keeping a mildly positive outlook for the future. “I think nothing is permanent, fortunately,” Wessel said regarding the current political and economic tensions.

If anything, this could be a time of opportunity for insurance leadership. Insurance has always led the way forward for economic growth. Said Wessel: “We’re in a moment when business leaders can be a more prominent voice to deal with tension […] The world is yearning for leadership.”

Don’t Get Burned by Mishandled Fireworks

Understanding FEMA and other flood maps