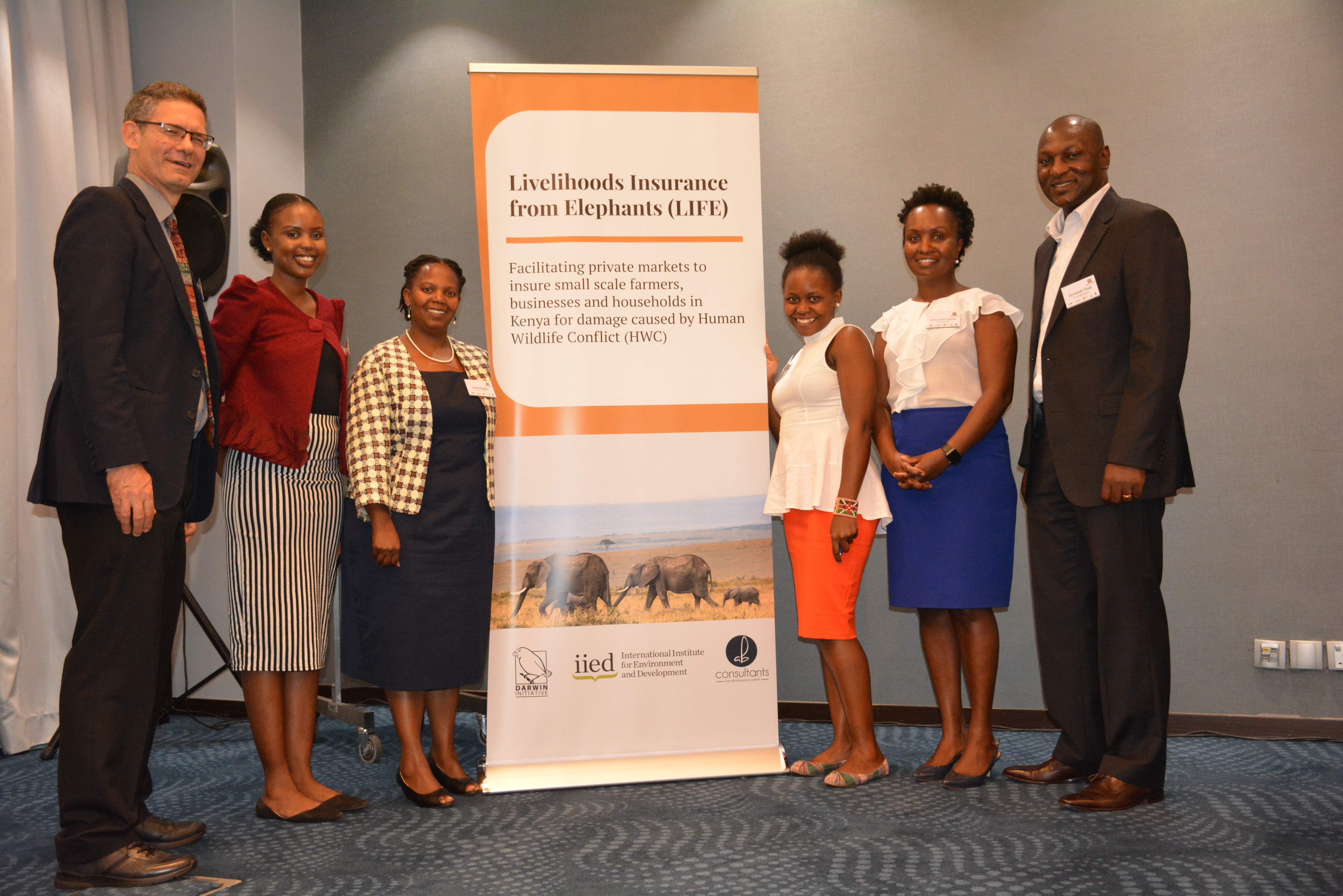 AB Consultants and IIED at a consultative forum, Kenya

Most wildlife in New York City is of the insect or rodent kind (though a peregrine falcon did once hang out on my air conditioner for a few minutes.) Not so in many parts of the world, including Africa, Asia and parts of North America. And as human populations continue to expand into natural habitats, there arise the inevitable clashes between humans and wildlife.

There’s even a term for this phenomenon: “human-wildlife conflict” (HWC). The World Wide Fund for Nature (WWF) notes that this conflict includes wild animals destroying crops, killing livestock, damaging property – and even attacking (and injuring) humans themselves. Humans will often retaliate by killing wild animals to prevent future attacks.

One way to help communities at risk of wildlife conflict is (drumroll please) insurance. To learn more about this kind of insurance, I spoke with Barbara Chesire-Chabbaga, director and lead consultant for AB Consultants, an organization that aids in the development of microinsurance and digital financial services across Sub-Saharan Africa. Her company is actively working to develop a microinsurance product for human-wildlife conflict.

HWC is a reality of daily life in many places with high populations of both humans and wildlife. Take Kenya: more than 65 percent of wildlife lives outside protected areas, which means human-wildlife interaction is inevitable in communities that live near those protected areas.

Unfortunately, death and injury (for both humans and wildlife) are not uncommon outcomes of HWC. But crop damage is the most frequent cause of loss from HWC. Chabbaga noted that, in Kenya “close to 3,000 cases of crop damage were recorded between the years of 2015 and the first 2 months of 2017, compared with 148 death and injury incidences.” And these numbers probably underreport the frequency of HWC crop damage.

Furthermore, crop damage can have significant ramifications for communities that depend on farming and livestock rearing. A single attack that leads to crop damage could impact that year’s harvest, which can result in a financial domino effect that reverberates long after the attack.

Chabbaga did note that compensation schemes for HWC are not a new idea, especially in areas with high rates of human-wildlife interaction. Indeed, financial mitigation for HWC has long been believed to yield significant benefits, by offsetting the actual losses themselves and by reducing wildlife retaliatory killings. Some of these schemes include the Big Life Foundation, the Amboseli Trust for Elephants and the Maasai Wilderness and Conversation Trust.

A typical compensation scheme will reimburse farmers for certain amounts if a wild animal destroyed their property, subject to certain conditions (like making sure that their farms are well-enclosed, and animals are well herded and away from protected areas, for example).

But straight compensation schemes have their limitations. They can be expensive, and often rely on donations, which leads to issues with financial stability and sustainability. Chabbaga cited a compensation scheme in the Mwaluganje elephant sanctuary, in which farmers yielded farmland for conservation purposes and were compensated yearly. But the scheme collapsed when funding ran out.

That’s where insurance comes in. “Microinsurance has the ability to pool larger numbers, employ technology and manage the entire client journey from registration to claim settlement in such a way that client value and the business cases are well-balanced,” argued Chabbaga.

“Human wildlife conflict is a new risk that has previously not been considered by insurance companies, but there is a general optimistic overview that HWC is an insurable risk worth exploring,” said Chabbaga.

AB Consultants is currently working on developing just that kind of HWC microinsurance in partnership with the International Institute of Environment and Development (IIED) and funded by the Darwin Initiative. Referred to as “Livelihoods Insurance From Elephants” (LIFE), the project is currently focused on two regions in Sri Lanka and Kenya, to determine how best to design an insurance product that can reduce losses for small-holder farmers and other low-income households from HWC. As you can probably guess from the name, the project is currently focused specifically on human-elephant conflict.

The LIFE project is still in the development phase and Chabbaga said that they’re still toying with the specific details of how to structure the policy, but she did give some idea of what the insurance will look like. “With microinsurance, the idea is to bundle as many risks as possible. With that in mind, it is possible that the scheme will include a majority, if not all, HWC related risks i.e. crop and property damage, death and injury.” Microinsurance typically has minimal exclusions, but for HWC insurance an important exclusion would be to deny coverage to a loss incurred by illegal activities such as poaching or trespassing into protected areas.

Consumers in the two pilot regions have so far expressed positive attitudes towards this insurance. The plan is to begin product rollout in January 2020.

For more information about microinsurance more generally, check out our webpage.